Ground Penetrating Radar Systems, LLC, is Albany's largest company specializing in the detection of underground utilities and the scanning of concrete structures. GPRS has an extensive nationwide network of highly trained and experienced technicians in every major U.S. market. When clients hire GPRS, they have the peace of mind of knowing that they have the most reliable scanning technology on their job site and they'll receive the assistance of a technician who can provide them with the most accurate data. For over a decade, GPRS has been the industry leader by providing outstanding service and cutting edge technology, keeping projects on time, reducing safety risks, and putting our relationships with our clients before profit.

To ensure the overall timely success of your project, utility detection is critical to any construction project where subsurface excavation is planned. If this critical first step is ignored, the risk for injury increases, budget overruns can multiply, and your schedule can be delayed.

Whether it's a renovation project or new build construction, the likelihood of needing to cut or core concrete is high. There is an inherent risk of striking rebar, conduits, and post tension cables during the cutting or coring process. If a striking occurs, repair costs begin to add up, delays creep into your schedule and it creates a safety hazard for your employees.

A water leak detection company that you can rely on, the GPRS team is here to help. We specialize in industrial, municipal and residential leak detection services. We’re experts in underground water leak detection, and our water loss specialists can quickly determine the root cause of the issue and recommend the appropriate fix. In many instances, including emergencies, we will utilize non-destructive testing (NDT) detection methods, including leak noise correlators, to avoid excavation, saving you money and time.

The goal of the GPRS Deliverables Department is to deliver clear and understandable findings with each of our outputs from field markings to field sketches, KMZ files, or CAD drawings that provide 2D site plans or even 3D CAD models. In addition, upon the completion of every project, our customers receive a job summary that includes job scope information, site photos, description of site conditions, equipment used, and notes from the project.

A local health care facility is currently working on utility installation project within their service area in Albany, New York. Prior to starting the required excavation for the placement of the new utility lines the contractor completing the work needed to know the location of the utilities present near the scope of work to eliminate the chance of striking any of the lines while the excavation was taking place. Ground Penetrating Radar Systems, LLC. was recommended to the contractor by past customers that knew they not only had the ability to locate the utility lines, but to also provide their respective depths beneath the surface. The project manager decided to give GPRS a call and was pleased to hear he was available to complete the project well within the needed time frame. 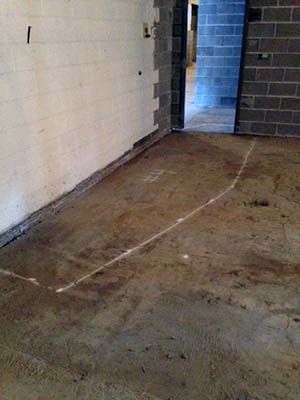 CSArch, an architectural firm based out of Albany, New York was called in to repair cracks found in the concrete foundation of an elementary school in Ballston Spa, New York. CSArch had previously located a void, or pocket of air within the foundation, and repaired it by cutting away the slab and inserting more concrete to support the newly inserted cement slab. After completing that project they noticed more of the same types of cracks that led to the discovery of the first void. CSArch then had to determine if and where more voids may have been located within the schools foundation. They could cut away the concrete in all of the areas where cracks had formed, which would have been very time consuming and expensive. The other option they had was to use a relatively new technology they had heard of, ground penetrating radar, which would not require all of the removal of concrete, but would still locate any areas that may have had pockets of air beneath the surface.